Top 10 most amazing Christmas lights records in the world

Inspiration for your home lighting installation

Do you know any Christmas lights records that make you wonder: ‘How is that even possible?’ While some may prefer simple decorations, others have armed themselves with courage and motivation to actually set world records for their impressive illuminations. This week, we’ve compiled for you the most incredible holiday lighting displays guaranteed to get you in the Christmas spirit.

Naughty or nice, people can’t wait for Christmas because it truly is ‘the most wonderful time of the year’. Colourful, joyful lights line up the streets and homes, entertaining and mesmerising the viewers. But some of us take all these decorations to a whole new level, transforming them into a holiday extravaganza.

Here are the most impressive Christmas lights records registered in the whole world:

1) The largest LED sculpture for the holidays

Aiming to outshine the other lighting companies, the Russian LED specialists put all their efforts into setting a world record. After wrapping it in string lights, LLC ZodiacElectro achieved the largest LED sculpture, composed of 23,120 LED lights. And they didn’t stop there. In 2017, the massive creation also became the world’s biggest musical Christmas bauble. Lights, please! 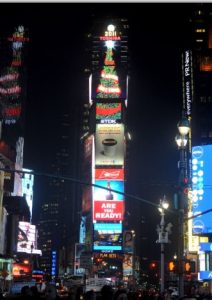 Spending a day in Times Square is always a memorable experience. And when you add the tallest animated lighting decorations to it, you’re definitely in the right place at the right time. The world well-known companies Toshiba Corporation and TDK Corporation created a screen-lit Christmas tree entirely made out of LED lights. Three years later, they broke their own record and got the world’s tallest digitally-animated Christmas tree, measuring 62.18 meters. High-tech… literally!

3) The most lights on a natural Christmas tree

Decorating a Christmas tree is all part of getting into the holiday spirit. That’s why a Belgium foundation understood that and even set a world’s record for the most lights on a Christmas tree in 2010. A grand total of 350 garlands 3 metres long and fitted with 576 lights were hanging on the sparkling tree. That means there were 194,672 lights lit simultaneously! In fact, this Christmas lights world record still stays on the old continent today. Hats off, Belgium!

Sri Lankan Arjuna Ranatunga Social Services chose to build an artificial tree for Christmas. Aiming for the stars, they actually obtained a world record for the biggest artificial Christmas tree composed entirely of lights and measuring 72.1 metres. Plus, the tree was built as part of a three-day carnival in the Gelle Face Green in Colombo, Sri Lanka. What a celebration it must have been!

5) The most lights on an artificial Christmas tree

It may not be the tallest Christmas tree; however, it definitely hosts the largest number of lights hanging on it. Last year, Universal Studios Japan set a new Guinness World Records title by fitting 570,546 lights to an artificial tree. ‘Shine bright like a diamond’, Osaka!

Now we’ve got some really good news for all the Aussie Christmas fans out there. Canberra’s own David Richards managed to coordinate a project that brought him the world’s largest Christmas lights display title.

This featured nearly 1.2 million lights making up a 3D image of three Christmas gifts spanning 3865m2. Plus, other tens of thousands of lights were installed to create a magical backdrop. The display not only transformed Canberra into a light festival but also raised money for the charity SIDS and Kids ACT. ‘A good deed brightens a dark world’, indeed!

Another successful story in the Guinness Book of Records is Brazil’s capital city with its largest floating Christmas tree in the world. The tree was sponsored by Bradesco Seguros e Previdência and was decorated with 2.8 million micro lamps and 37 km of luminous hose. Just let it flow…

Next, the title for ‘the largest indoor light bulbs display’ goes to Singapore. In 2016, Universal Studios created an amazing, colourful winter wonderland using not more and not less than 824,961 light bulbs. Therefore, the visitors were able to enjoy the electrifying exhibit well through the holiday season.

9) The most Christmas lights decorating a home

There may be beautifully decorated houses out there but one of them glows among the rest. It’s about an American family’s home that earned the world’s most lights on a residential property record. More like a family tradition, they turned on 601,736 lights to decorate their house. It is worth mentioning here that the previous record for it belonged to David Richards, the same that took home lighting to a whole new level. There’s really no place like home for them.

Last but definitely not least is an Australian innovative idea to bring another well-deserved world record. More exactly, it took 120 cyclists on stationary bikes to generate electricity. The energy created by the bikes lit the lights on Christmas trees, eventually creating one massive Christmas tree. Therefore, they earned the record for the most lights lit by pedal power: 35,028. What a productive work out!

So do you feel inspired by any of these Christmas lights records? Just ensure you have plenty of lights, charge yourself with tons of motivation and…start decorating!

Are you looking for an experienced electrician to take care of your home lighting installation this holiday season? Talk to one of our friendly specialists on 1300 452 742  or get in touch with us online.